I've used a bunch of detectors since I've been in the hobby. The T2 SE has the best discrimination at depth that I have ever used hands down. Mostly relic hunt but love old coins. I had given up on a spot that had produced at least a hundred coppers. A friend of mine convinced me to hunt it again.

I pounded this spot with a XLT & my CZ's. I said what the heck and I took my T2 SE in there and it was like I never hunted it. I have to say I was using a big aftermarket coil. One day at the end of the hunting season when it was dry and the weeds were high I tried a cow path that was rutted. I got a great signal and dug it. It turned out to be a copper of some sort. I really didn't know what it was. At the end of the hunt we stopped at a gas station and washed it off. My hunting buddy was there and I said it’s a chain cent. We were in awe! The T2 SE has put a lot of keepers in my pouch for shore. Thanks First Texas for such great machines! 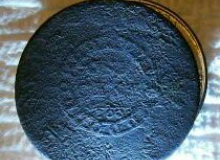