If you are like many first-time metal detector users - you remember the feeling when you unboxed your first metal detector.   It was the best one to ever roll off the assembly line.   Little to no difference if it was a beginners model for $50, or a $2000 upper-end model.  It was YOUR detector and your time was now!

Surely somebody buried gold bars at your local park.  Or maybe a lost Viking hoard just waiting in your backyard.  The crown jewels wrapped in gold, just waiting for you to uncover.  Get your retirement life in order, put your two week notice in at work.  You were going to hit it big on your first trip out.

You probably also remember the drive back home.  Sore legs and back from bending up and down multiple times.  A pocket full of pulls tabs and scrap bits of various metals.  If you were lucky, maybe a few clad coins to take the sting away.

Perhaps you should call your boss and tell him you don’t want to quit in two weeks after all.

Don’t despair.  99% of the metal detectorists out there will never hit it big.  It is one of the biggest myths in the hobby.  Take pride in each wheat penny - every silver coin - every small nugget the size of a pencil eraser.  For most of us that will be about as good as it gets - and there is nothing wrong with that.  Enjoyment of the hobby should always come before the value of the find.

Fresh air - bonding with a hunting partner like a family member or friend - getting some exercise.

Remember - your personal finds and adventures will always be the “best” find there is.

That being said - there is still the 1% out there that do hit retirement type finds.  So let’s take a look at some of their best metal detecting finds ever.  Like always - this is just a random list in no particular order.

The Boot of Cortez

Weighing in at 26.7 pounds (389.4 troy ounces) and selling for just over $1.5 Million US dollars,  this boot-shaped gold nugget was uncovered in the extremely hot and arid Sonora Desert of Mexico in 1989.  The metal detector used was bought at a Radio Shack and was most likely a Bounty Hunter variant.

Metal detecting technology has changed greatly since then the 80’s, and according to experts less that 1% of the gold on earth has been found.  So there is still a fair chance that a larger nugget will be found someday soon.

Keeping with the gold nuggets trend - this monster was found in Butte County, California near Chico.  It laid at a depth of 12 inches.  Weighing in at 6.07 pounds (88.5 troy ounces) the metal detectorist that found it thought it was a deep pipe or piece of random trash.   The only reason he dug it is because he thought it might be hiding some smaller sized nuggets underneath.   Well, that obviously was not the case.  It sold for $400,000.  Both the buyer and the man who found it wish to remain anonymous.

It is thought the Butte Nugget is the 2nd largest California nugget still intact.   Only the Mojave Nugget beating it in size. 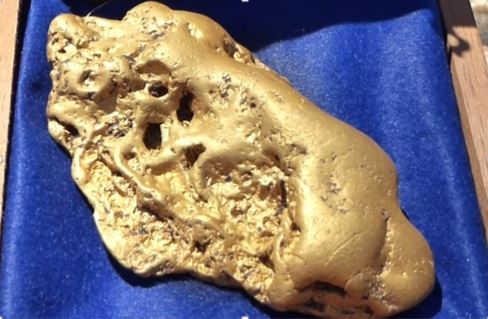 13-year-old Jansen Lyons was interested in meteorites.   So much so his grandfather put a metal detector in his hands so he could have a better chance of finding one.   Oh boy did he find one.

Coming in at over 2 pounds - he dug up an “L6 ordinary chondrite” in a suburb of Albuquerque new Mexico.   It is suspected to have been there over 10,000 years.

Jansen now owns multiple metal detectors and is still on the hunt for his next meteorite.   As far as the value of the space rock?  We may never know.  Jansen has decided not to sell it, but to keep it for himself.   He did however break off a piece that is now on display at a museum.

Terry Herbert just might be the luckiest metal detectorist to ever walk the earth.  A metal detectorist who decided to test hunt farmland right close to where he lived in 2009.   It would be the best decision of his life - as he passed his coil over one of the greatest early Anglo-Saxon finds ever unearthed.

In the next 5 days of beeping and digging, he uncovered the entire Staffordshire Hoard.  Roughly 3500 pieces of gold, silver, and garnet encrusted jewelry.  Including swords and a helmet, it totaled 11 pounds of gold and 3 pounds of silver.

Almost entirely military type finds, the hoard was purchased by the Birmingham Museum and Art Gallery for a whopping £3.285 million. 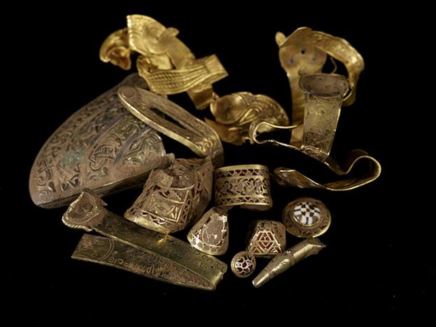 So there we have it - just a small taste of what can be found with a metal detector if you are lucky enough.   While the chances are extremely thin to find something so grand, we never know what we will uncover while swinging our detectors.  Think positive - enjoy the hobby for what it is, and you just may have your name on a list like this someday.

This blog post was authored by John Schmidt aka (TheHunterGT). John is a prolific YouTuber and metal detectorist who has gained respect in the metal detecting community for his knowledgeable and informative videos and forum posts. John can be reached through his blog at http://thehuntergt.com/wordpress/